Who you can’t vote for in the Logies… 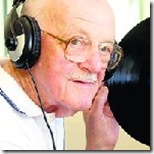 Ken Austin, well known radio and television identity in Shepparton, has died at the age of 86.

He started his radio career as a teenager at Warragul-based radio station 3UL in 1941 and after serving with the army returned to the station.  In 1949, he was promoted to the position of chief announcer at sister station 3SR in Shepparton.  Four years later he moved to 2GZ, Orange, before returning to 3SR in 1955.

In 1968 Austin made the full-time move into television, to local station GMV6 (now a branch of the WIN television network).  For the next 20 years Austin maintained a number of roles at the station.  “I did everything, but cut the lawns I think,” he once told the Shepparton News.  “I compered shows, read news, chaired live commercials in the studio and spent my last few years there as the community affairs director.”

Austin retired from the station in 1988 but maintained a profile in the local community, through charity work and, for 17 years, presenting a radio program on community station ONE FM.  He was also named an Honorary Life Governor of Melbourne’s Royal Children’s Hospital as recognition of his work at GMV6.

Permanent link to this article: https://televisionau.com/2010/01/ken-austin.html