The first stage of the national roll-out of ABC’s television network was Sydney and Melbourne, completed in 1956, and the second stage was to expand ABC to the so-called “BAPH” cities – Brisbane, Adelaide, Perth, Hobart.  ABT2 Hobart was the last of these to go to air when it launched on 4 June 1960. 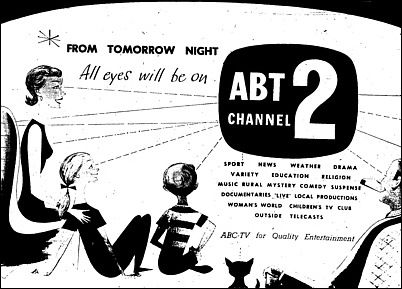 Thousands of viewers on a cold Hobart night watched as Postmaster-General Mr C W Davidson officially opened ABT2 shortly after the test pattern faded at 7.00pm.

Dame Enid Lyons, Australia’s first ever female politician and Resident Commissioner for the ABC in Tasmania, was on hand to introduce on-camera the distinguished guests that had arrived at the new studios in Harrington Street.  The new studios, which started construction in November 1958, were built at a cost of £120,000 and would house all local operations for the national broadcaster, including an orchestral studio.

Mr Davidson also personally acknowledged the special efforts of the State Government, Hobart’s city council and the Hydro Electric Commission for their co-operation in assisting the Postmaster-General’s Department and ABC in getting the necessary infrastructure in place in very challenging conditions – in particular the extreme weather conditions at the transmitter site on top of Mount Wellington, with extreme winds, ice, snow and rain causing any number of challenges.

ABC chairman Sir Richard Boyer said that it was apparent, after three years of television on the mainland, that the new medium would represent a significant change to Tasmanian society:

“Television can be of great benefit to the community and can give enjoyment to thousands of people in the comfort of their own homes.  I think it is clear to all, now, that the coming of television is itself historic and socially critical.  Whether we like it or not it marks a new dimension in civilised life.

“Our homes, our habits, leisure, and our educational, religious and political life cannot fail to be affected by it.  It is just not a new toy.  It is something each of us, as the years go on, will have to make terms with – fitting the new into the old and, we hope, adding colour and meaning to life by its employment, while still retaining the essential values of our traditional culture.

Flashbacks On The News featured ABC film footage of news events of recent years, including royal visits and significant local and mainland events.

Growing Up With Guba finished off the opening night’s programs.

ABT2 was launched only a couple of weeks after Hobart’s local commercial channel, TVT6, began official transmission.

The third stage of the national rollout of ABC’s national network started in 1962 with the launch of ABC3 Canberra and the planned launch of 32 regional stations around Australia over the next four years.

Permanent link to this article: https://televisionau.com/2010/06/abt2-launch-signals-abc-milestone.html