Just days after the resounding ratings and critical success of ABC’s two-part mini-series Paper Giants: The Birth Of Cleo, the Nine Network has announced production of what is essentially a sequel.

The new two-part mini-series, to commence production in 2012, is set to trace the rise of a young Kerry Packer, after the death of media mogul father Sir Frank, in particular the events surrounding the formation of his rebel cricket competition, World Series Cricket, which revolutionised cricket in the late 1970s with the glamour of prime time coverage on his Nine Network, ending decades of the traditional broadcast of the game by ABC.  The new series will follow the legal battles, the secret player dealings and the turf battles with the cricket establishment. 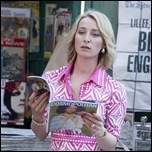 The new series will be a production of Southern Star and John Edwards, the team behind Paper Giants, which told the story of the 1972 launch of groundbreaking women’s magazine Cleo by editor Ita Buttrose (played by Asher Keddie, pictured right) and with the support of Kerry Packer (Rob Carlton, pictured above).  The performances of the cast, but Keddie and Carlton in particular, as well as the reconstruction of the early 1970s era have earned rave reviews and high ratings over its two nights on ABC1.  The Sunday night debut was watched by 1.2 million viewers across the five capital cities, while the Monday conclusion was watched by 1.34 million – making it ABC’s highest rating program of the year to date.  By Monday night the series also clocked up over 17,000 views on ABC’s online viewing portal ABC iView.

The national broadcaster has now scheduled a repeat of the series, to appear in a three-hour screening next Sunday, 24 April, from 8.30pm on ABC2.

The Australian reports that ABC was keen to pursue the rise of Kerry Packer and World Series Cricket as a sequel, but the ratings success of Paper Giants saw Nine rush into a deal with Southern Star and effectively block ABC from any access to Nine’s archive of cricket coverage, promotions and player footage.

Despite the deal struck between Southern Star and Nine, the production company is said to be discussing options for another magazine-themed drama for ABC.

Permanent link to this article: https://televisionau.com/2011/04/abc-success-sparks-nine-spin-off.html