Geoffrey Rush – our Australian of the Year 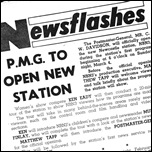 This year will be one of celebration for Newcastle-based regional network NBN as 2012 marks the 50th anniversary of its debut.

Launching on Sunday, 4 March 1962, it was the first regional television station in New South Wales and the fourth nationally.  Construction of the station’s premises in Mosbri Crescent, Newcastle, had been 18 months in the planning – culminating in a two-studio complex capable of producing large-scale “live” production as well as news bulletins, women’s and children’s programs, weather reports and commercials.  Programs were then beamed from Mosbri Crescent to a 450-foot mast atop Mount Sugarloaf which would then broadcast the NBN3 signal to an area of over 420,000 people, stretching from Gosford and Sydney’s northern suburbs in the south, almost as far north as Taree and out west to Scone and Muswellbrook.

“The Postmaster-General C.W. Davidson will officially open the new Newcastle station, NBN3, during the station’s first program beginning at 6.00pm on Sunday night, March 4.  Before the official opening NBN3’s production executive Matthew Tapp will welcome viewers and talk briefly about the programs the station will show.”

“Women’s show compere Ken Eady will then conduct a 20-minute tour of the station to show NBN3 viewers how its programs are made.”

“Ken will introduce NBN3’s children’s compere and newsreader Murray Finlay, who will complete the tour with a look at the station’s newsroom.”

“Matthew Tapp will then introduce the Postmaster-General for the official opening.  This will be followed by the station’s first news service read by Murray Finlay.” 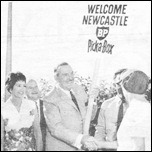 NBN3 initially promised a schedule of around 56 hours of programming a week, starting transmission each day from around 2.30pm.  Like with many Australian stations at the time, programming was predominantly American but with the addition of popular Australian programs like BP Pick-A-Box (with presenters Bob and Dolly Dyer welcomed to the NBN3 studios at the time of its local debut).

But despite NBN3 being the region’s first television station many locals were more than familiar with television.  Much of NBN3’s coverage area also received fortuitous coverage of the Sydney channels – leading to a proliferation of high-mast antennas sprouting up on top of many homes to  get a clearer picture of the Sydney-based signals. 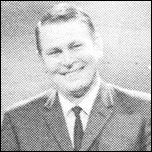 New Zealander Murray Finlay (pictured) presented NBN3’s first children’s program, The Three Cheers Show, and was also the station’s first newsreader.  NBN3’s first news service (produced in association with 2KO) was a half-hour bulletin each night at 6.30pm, comprising a mix of local, national and international news.  The bulletin was later extended to 35 minutes, then 40 minutes and then, in 1972, a one-hour newscast – the first regional-based one-hour newscast in Australia – in a format that continues to this day.

Finlay was the front man for NBN’s evening news for over twenty years and his successor, Ray Dinneen, also served at NBN for over thirty years before retiring in 2010. 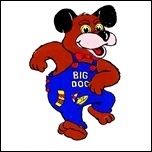 NBN has always maintained a level of local production – with programs over the years including a local franchise of pre-school program Romper Room, the long-running Travel Time With Jayes, morning shows The Breakfast Club and Today Extra, and telethons and community announcements for local charities.  The station’s mascot Big Dog (pictured) has also been a favourite with junior viewers for many years and can still be seen each evening as he wishes boys and girls a good night.

Over the years, the station has been acknowledged for its contribution to television – winning a TV Week Logie in 1963 for excellence in programming by a country station and then another six Logies between 1976 and 1995 for outstanding contributions by regional television.

The advent of aggregation saw NBN’s signal expand across the wider Northern NSW/Gold Coast market from December 1991, adding the markets of Tamworth, Taree, Lismore, Coffs Harbour and the Gold Coast to its coverage area as the Nine Network affiliate.

NBN has had a number of owners since its inception in 1962, but since 2007 it has been owned by Nine’s parent company PBL Media (now Nine Entertainment Co.).

To celebrate its 50th anniversary NBN will be holding a reunion of past and present employees on Saturday, 10 March.  The event will include a collection of nostalgic footage and photos from the past 50 years.  Any past employees wishing to attend the reunion are invited to contact NBN by email [email protected] or contact Promotions Manager Mike Rabbitt on telephone (02) 49292333.

And throughout 2012, NBN News will be presenting a series of special reports on different aspects of the station’s history and significant community events of the last half century.

Later this year it will be the end of an era when NBN switches off analogue transmission across its coverage area (excluding Gold Coast and Gosford, which will occur later) in the conversion to digital-only broadcasting – but more significantly it will mark the end of transmission from Channel 3 from Mt Sugarloaf, the signal that launched NBN 50 years ago.

Permanent link to this article: https://televisionau.com/2012/01/nbn-celebrates-50-years.html