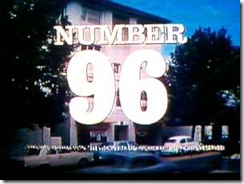 Some great news has come via Ian McLean’s Have Phaser, Will Travel blog … Number 96 is coming back via a second DVD release!

The first DVD release in 2006 featured the 1974 feature film of the infamous series, as well as the 1976 documentary They Said It Wouldn’t Last commemorating the show’s 1000th episode, plus other extras including rare footage taken when the cast journeyed from Sydney to Melbourne by train and made stops along the way to meet crowds of Number 96 fans.

Number 96 is one of several Australian TV titles to be released on DVD by Umbrella Entertainment; others including Blankety Blanks, The Young Doctors, Sons And Daughters, Skippy and E Street.

Read the full story at Have Phaser, Will Travel

Permanent link to this article: https://televisionau.com/2008/05/newsflash-number-96-dvd-2.html