Sunday, Nightline given the chop 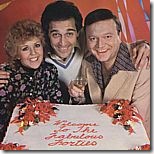 There’s not many people that can claim to have been featured on This Is Your Life three times, but Bert Newton achieves that with this week’s tribute special to coincide with his 70th birthday – following from his first appearance in the 1970s version hosted by Roger Climpson, and his second which followed twenty years later.

Appearing in the special event, which in usual This Is Your Life custom was sprung onto Bert by surprise when it was taped a few weeks ago, are guests including Hugh Jackman, Olivia Newton-John, Rove McManus, Ugly Dave Gray, Lisa McCune, Julia Morris, Anthony Callea, Eddie McGuire and overseas stars Joan Rivers, k.d. Lang, Julian Clary, Michael Buble and Clive James.

Permanent link to this article: https://televisionau.com/2008/07/happy-birthday-bert.html