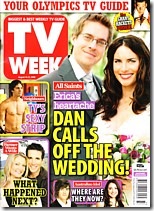 Actor Mark Priestley, from long-running series All Saints, has been found dead in Sydney.

The 32-year-old Perth-born actor is believed to have suffered from depression and may have taken his own life.

Graduating from NIDA in 1999, Priestley worked in the theatre with the Bell Shakespeare Company and the Sydney Theatre Company, before guest roles in TV series including Water Rats, Blue Heelers and The Secret Life Of Us as well as mini-series Changi and telemovie Loot. He joined the cast of Seven‘s All Saints as Dan Goldman in 2004.

Priestley’s death comes just days after his character was wed to hospital colleague Erica Templeton (Jolene Anderson) on an episode of All Saints, watched by over 1.2 million viewers.

In a statement on Seven’s website, program and production director Tim Worner paid tribute to Priestley:

“Mark was such a brilliant artist. His work on stage and screen was admired by everybody who knew him. His death is such a sad loss. We at Channel Seven will miss his energy and smile.

“Our thoughts and prayers are with Mark’s family and friends.”

Permanent link to this article: https://televisionau.com/2008/08/mark-priestley.html