Jeff Newman calls it a day

Seven to check out from All Saints 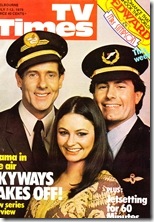 Skyways taxis for take-off
The Seven Network’s long-awaited airport drama series, Skyways, debuts this week in Sydney and Melbourne. With on-location filming conducted at Melbourne’s Tullamarine airport, the series is based on a fictional airport, Pacific International, and features its own airlines, Federal Airlines and Trans Asia. Producer Hector Crawford has described it as “strong drama, with a humorous touch; not exaggerated, but with a very honest approach to life.” HSV7 general manager Ron Casey said the series has a higher risk factor than most other programs: “The logistics of the program caused major problems. Our technical people had to solve many unexpected hitches. For instance, our equipment was seriously affected by the airport radar, and our schedules were put back about six week until our technicians solved the problem.” Producer Jock Blair said the program portrays a balanced view of life at an airport: “We are aware of the public sense of fear associated with flying, but I think the way we show safety measures and the quite incredible safety training of the flight crews will mean audiences will get a balanced picture of the everyday workings of an airport.” Skyways’ cast includes Bruce Barry, Deborah Coulls and Bartholomew John (pictured).

And now… TV drama for Kennedy?
The guessing game over Graham Kennedy’s return to television continues, following recent reports that he was to appear in a new comedy series for the Seven Network, and there have also been rumours of hosting variety shows for the Nine and Seven networks or hosting a nightly current affairs show for ATN7 Sydney. Kennedy’s manager, Harry M Miller, responds to some of the rumours: There have been no discussions with Nine at all about a return to the network. Kennedy has had an approach from Mike Willesee about hosting the Sydney-based Willesee At Six, but nothing further has developed. Kennedy is not doing the comedy role, but may appear in a drama series. Kennedy is also considering offers for movie roles, including one based on David Williamson’s play The Club. 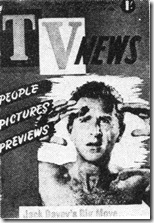 21 years of TV Times!
TV Times celebrates its 21st birthday this week. The magazine initially started as Sydney-based TV News in June 1958 and was re-launched as TV News-Times in August 1959. The title was shortened to TV Times in November 1959. The first issue (pictured) reported on Jack Davey’s move from ATN7 to TCN9 in Sydney and remarking that he was planning a series along the lines of I Love Lucy. Actress Gwen Plumb was the star of an ABC series What’s In The Picture? and Ross Higgins was compering ABC’s Children’s TV Club.

Saga of a show called Carrots
From 1 July new rules were in place for the broadcast of programming aimed specifically aimed at children between 4.00pm and 5.00pm weekdays. Programs have to be approved by the Australian Broadcasting Tribunal to receive the new children’s ‘C’ classification in order to be shown in that timeslot. Networks are angry as some of them were already developing new children’s programs before the Tribunal, as late as May, had issued guidelines on what would be approved. The Seven Network had spent $250,000 on a new series, Carrots, that was to air weekdays at 4.30pm and has failed to obtain the ‘C’ classification at the last minute. Seven claims that its program was based on the recommendations in the Self-Regulation for Broadcasters report, which at the time was the only guideline available to broadcasters. Producer Julian Jovers defended the program: “It has a cast of good actors, it’s fully scripted, has a permanent set and budget. We’re spending an excess of $20,000 a week producing four episodes.” The program had been screened to groups of children from varying backgrounds to assess their responses and they had largely responded positively, though some changes were made based on feedback. Earlier this year, episodes had been submitted to the Tribunal for comment. The tribunal did not respond until 11 June when it advised ATN7 that Carrots, and eight other programs that had been submitted by networks, had been rejected.

Lorraine Bayly is enjoying the sights of Los Angeles and has not given any indication as to a return date to The Sullivans. 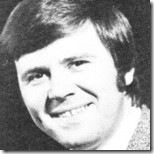 Reporter Ray Martin (pictured) says there is absolutely “no difference” between being a reporter for ABC’s Four Corners and the Nine Network’s new 60 Minutes – although he has noted that, since leaving ABC as its New York correspondent, the fan mail is now coming from much younger viewers rather than “old ladies.”

Viewpoint: Letters to the Editor:
”I am 15 years old, and for the first time in history I found a teenage show that didn’t star starry-eyed little goodie-goodies. I refer, of course, to James At 16.” M. Wolfshaar, QLD.

“I thoroughly enjoyed both Roots and Roots: The Next Generations. I cried. It was very moving. I hope they keep the family name going on and the story behind it. Good on you, Alex Haley.” G. Williams, NSW.

“I have been a fan of Doctor Who ever since I can remember, but lately Blake’s Seven became the highlight of my week’s viewing. Thanks again ABC for taking the brave step that at present the commercial stations are not taking – showing a sci-fi program in adult viewing time.” R. Sallis, VIC.

What’s On (July 7-13):
This Week Has Seven Days (HSV7, Saturday) looks at the recycling of plastic wastes being used in school art classes. Other topics covered today include kidney disease, a visit to Japan by two Australian students and looking at the career of a religious leader.

In the debut episode of Skyways (HSV7, Monday) there is a commotion at Pacific International Airport when an attractive East German girl defects. Then, in sinister circumstances she disappears from the airport. Acting airport manager Paul MacFarlane (Tony Bonner) loses his promotion because of the trouble.