Seven to check out from All Saints 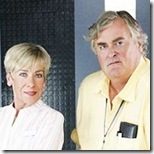 The Australian is reporting that, while the Seven Network has not made any official statement, the long-running series All Saints will not be renewed for 2010.

The medical drama, launched in February 1998 as a starring vehicle for Georgie Parker, still commands strong audience figures but is a costly production taking into account the location shoots and medical rescue themes.

The series’ ratings are also pale in comparison to Seven’s newer ratings hit Packed To The Rafters.

The series has given work to some of Australia’s most well-known actors and writers over the years. But only one cast member, Judith McGrath (pictured, with co-star John Howard), has survived the show’s entire 12-year run as Yvonne ‘Von’ Ryan.

Permanent link to this article: https://televisionau.com/2009/07/seven-to-check-out-from-all-saints.html