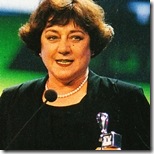 Actress Monica Maughan, star of stage, film and television, has died in Melbourne.

One of Australia’s most recognisable actresses, Maughan made her professional debut back to 1957 with the Melbourne Theatre Company.  It is believed that in her career spanning half a century she had starred in more MTC productions than any other performer.

Television viewers will recognise Maughan from her roles in popular dramas The Box and Prisoner and in the ABC series The Damnation Of Harvey McHugh, which led to her winning an AFI award, for best lead actress, and a TV Week Logie award for most outstanding actress.

Other television roles included appearances in Homicide, Matlock Police, Glenview High, Cop Shop, Loss Of Innocence, Skyways, The Flying Doctors, The Gillies Republic, Come In Spinner, Col’n Carpenter, A Country Practice, The Genie From Down Under, Blue Heelers, MDA and, as Graham Kennedy’s grandmother in the biographical telemovie, The King.

In recent years she appeared in films Crackerjack, Strange Bedfellows and Blessed.

Her last credited TV appearance was in the ABC comedy The Librarians.

Permanent link to this article: https://televisionau.com/2010/01/monica-maughan.html