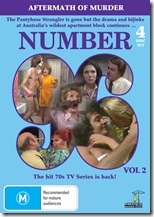 13 March 1972 was the night that Australian TV ‘lost its virginity’ with the Sydney debut of Number 96.  (Melbourne followed the next night)

The 4-disc set, Number 96: Aftermath Of Murder, will include 32 episodes from the first half of 1975, picking up from where the last DVD left off when the identity of the mysterious Pantyhose Strangler was revealed.

Andrew Mercado has a preview of the upcoming DVD release and Number 96 historian Ian McLean’s blog, Have Phaser Will Travel, has the list of episodes to feature on the DVD.

Number 96: Aftermath Of Murder is being released by Umbrella Entertainment.

Permanent link to this article: https://televisionau.com/2010/01/number-96-aftermath-of-murder-dvd.html