ABC2 gets a new look 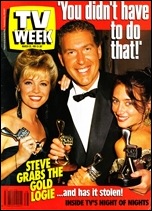 Off to a flying start!
”The best in a decade!”  That’s how one high-ranked television executive – not connected to host broadcaster the Nine Network – described the 33rd annual TV Week Logie Awards.  And the night got off to a flying start, with host Daryl Somers making his spectacular entrance from high up in the ceiling of the World Congress Centre, Melbourne, on a flying fox.  The opening of the Logie Awards presentation also included a performance by Debbie Byrne and the Electric Legs dancers.  Somers, hosting the event for the second time, says he was “very happy” with his job as host.  “It was a great team effort all around.  It was a real buzz for me.  I felt comfortable and relaxed.  I really enjoyed it.”  Overseas guests attending the Logies included actress Angie Dickinson and Twin Peaks stars Peggy Lipton and Michael Ontkean.  The awards presentation ended with Tonight Live host and producer Steve Vizard (pictured with fellow award winners Rebecca Gibney and Georgie Parker) being awarded the Gold Logie for most popular television personality in Australia. 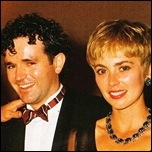 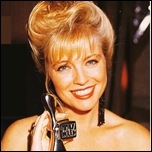 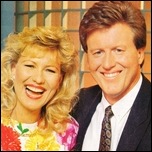 Briefly…
Good Morning Australia’s Kerri-Anne Kennerley (pictured with co-host Tim Webster), now in her tenth year as co-host of Ten’s breakfast program and about to clock up her 2500th episode, says she couldn’t have reached such a milestone without a stable home life.  “Thank goodness I have a fantastic husband who has put up with the lifestyle all this time,” she told TV Week.  “If I didn’t have my stability at home it would lead to tensions, as it would for anyone.”  The show has had a revamp this year, including the return of Ten newsreader Webster as co-host after a break of around three years from the program.

Award-winning actor Shane Connor is about to join the cast of Neighbours as baddie Phil Hoffman, who meets Carolyn Alessi (Gillian Blakeney) as she is about to give evidence in a murder trial which Hoffman is connected to.  With a background in stage and film roles, it is Connors’ first ongoing role in a TV series following a guest appearance in The Flying Doctors and a role in the mini-series Poor Man’s Orange.

Chances star Natalie McCurry admits that she dislikes the nude scenes which are commonplace in the Nine Network series.  “I’m not happy about doing nude shots but it’s part of the job,” she told TV Week.  “I’m very careful about what I do and how I portray my character.  As long as it isn’t gratuitous, and is done with some class, it’s all right.  But if it’s nudity for its own sake then it really degrades the show.” 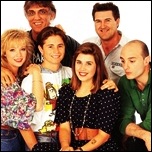 John Laws says…
”All Together Now is one of the new breed of locally-made TV comedy series which seem to be hauling high enough ratings for everyone to be confident about their long-term prospects.  Eggshells, which I’ve already praised in this column, is doing well for ABC, and Hey Dad! is proving a most consistent winner for Seven.  Ten has got into the act, too, with repeats of Mother And Son pulling in higher ratings than Eggshells (by the same writer, Geoffrey Atherden, and also starring Garry McDonald) on the same night.  The lesson, of course, is that viewers are keen to watch Australian comedy – especially when it’s got a bit of zing and life about it.”

Sunday:  Seven’s afternoon of sport includes the final of the NBL KMart Classic, from Homebush, Sydney, and live coverage of AFL from Perth featuring West Coast Eagles versus Melbourne.  Seven also presents afternoon highlights of the match between Footscray and Collingwood.  Sunday night movies are Assassin (Seven), Acceptable Risks (Nine) and House (Ten).  Ten then presents Sportsweek with Eddie McGuire and Steve Quartermain followed by a delayed telecast of the Rugby League match of the day between Canberra and Parramatta.

Tuesday:  In Chances (Nine), as Chris (Mark Kounnas) becomes more and more confused about his sexuality, Sarah’s (Anne Grigg) solution is set to rock the Taylor family.  Nine then presents a delayed telecast of the 63rd annual Academy Awards from the Shrine Auditorium, Hollywood.  Nominated for Best Picture are Awakenings, Dances With Wolves, Ghost, The Godfather III and Goodfellas.

Good Friday:  Seven devotes the day to the traditional Royal Children’s Hospital Good Friday Appeal.  The telethon starts at 9.00am, with a break for Seven News with Peter Mitchell at midday, and continuing through to 6.00pm.  The telethon’s evening session starts at 7.30pm with a variety special hosted by Jennifer Keyte, Derryn Hinch and Steve Vizard and featuring performances by Tina Arena, Paul Norton, the cast of The Phantom Of The Opera and The Seekers.  The appeal closes with the announcement of the grand total at midnight.  ABC commemorates Good Friday with a special screening of UK series Songs Of Praise and World Of Worship presents a Good Friday Service from Perth.  Nine presents a special, The Jerusalem Passion, and an Easter edition of Turn Round Australia.