This Is Your Life gets a modern makeover 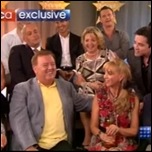 Joining ACA reporter Ben McCormack for a look back at the hit show were host and producer Johnny Young and former junior cast members Nicole Cooper, Karen Knowles, Stephen Zammit, Lorena Novoa, John Bowles, Debbie Hancock, Phillip Gould, Beven Addinsall, Greg Poynton, Jane Scali, Joey Perrone and Mark McCormack.  They talked about the show’s impact on their own lives as they were growing up, claims made about the show by former cast member Debra Byrne in a recent book (Young said the book was an honest account from Byrne’s perspective but some aspects were blown out of proportion by a certain weekly magazine), the challenges in song selection when considering the age of the performers, and even Young’s own admission that he did secretly have a favourite YTT team member but was not going to reveal who it was!

The segment also acknowledged former cast members Jamie Redfern, Sally Boyden, Tina Arena, Dannii Minogue and Byrne, who all went on to enjoy stardom after leaving the show, and paid tribute to Juanita Coco, who was tragically killed in a road accident in 1993, and Julie Ryles, who passed away just recently. 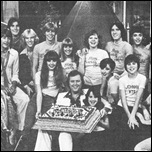 Young Talent Time was launched as a low-budget Saturday night variety show on Melbourne’s ATV0 in April 1971 as an alternative to football broadcasts on the other channels.  The program soon went national and collected a number of TV Week Logie awards – including a 1982 award for sustained excellence in television and Young’s induction into the TV Week Logie Awards’ Hall of Fame in 1990.

The show continued until late 1988 when it was abruptly cancelled over the summer break so it was never allowed a proper send-off.  A reunion special was hosted and produced by John Bowles in 2001 and there have been on and off again rumours of a 21st century revival of the format – encouraged in part by the Facebook-led campaign that saw the return of another former favourite, Hey Hey It’s Saturday, to screens in 2009.

Meanwhile, Young Talent Time is approaching the 40th anniversary of its debut and there are plans for a concert tour to celebrate the occasion – details will be posted at ytt.com.au and on Facebook.

The video of the ACA story can be seen at their website.

Permanent link to this article: https://televisionau.com/2011/03/young-talent-time-reunited-on-aca.html