TV4 coming to the Seven Network 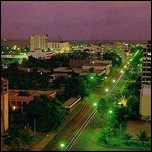 Although television started in Sydney and Melbourne in 1956 it wasn’t long before other capital cities joined in – Brisbane, Adelaide and Perth in 1959, Hobart in 1960, Canberra in 1962 – but for people in Australia’s smallest and most isolated capital city it was a much longer wait.

It was 1971 before television arrived in the Northern Territory capital of Darwin. The first channel to air was ABC’s local outlet ABD6, opening in August 1971.

Although Darwinites are known to like a drink, apparently the arrival of television had a major impact on attendances at Darwin pubs as many would race home to enjoy the wonders of the new medium. This would potentially be of concern to the local brewers, except that at the time Swan Breweries was a major shareholder in NTD8 and, as the sole commercial channel in town, business was thriving.

Colour television was to arrive formally in March 1975. In a TV Times article in October 1974, it was reported that NTD8 was confident that it was on schedule to have its facilities upgraded for colour in time for the March deadline. The ABC, however, was less optimistic. With a vast network of hundreds of transmitter sites Australia-wide to be converted, ABD6 was far down the list of sites to be enabled for colour – with a tentative conversion date of sometime in 1978!

But on Christmas Day, 1974 – barely two months after the article’s publication – Darwin was devastated by Cyclone Tracy. Much of the city was destroyed and Darwin faced a mass evacuation to bring the population down from 45,000 to 10,000 within days as the recovery effort took place.

The cyclone took out all television and radio stations but the ABC, as the national broadcaster, was able to get ABD6 and its radio services back on the air within days. NTD8, however, was less fortunate and took until October 1975 to return to the airwaves – providing even then a fairly rudimentary service. 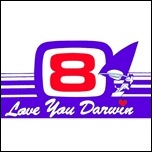 But in the years to follow the city of Darwin was re-built as was NTD8.  The channel also undertook a $2 million redevelopment of its studios in the early 1980s, although transmission hours by 1982 were still largely limited to the evenings, with daytime broadcasting only on Sundays and Wednesdays. The channel was also limited in communication infrastructure to the major cities, as the only inbound microwave link available to Darwin was leased full-time to ABC – leaving NTD with little means of timely access to national news stories or program material from interstate. The channel did, however, maintain local programming including local sports coverage and discussion and a current affairs program, Spectrum.

The monopoly situation with the microwave link was rectified by 1982, finally giving NTD8 an instant connection to the major cities and enabling it to launch its first news service, News At Seven, in October of that year, initially in affiliation with the Nine Network but later changed to Seven. One of the original members of the News team was Andrew Bruyn, who became the channel’s general manager in 1991 and continues in that role today.

By the mid-1980s, NTD8 was part of a bid to obtain the licence to operate a Remote Commercial Television Service (RCTS) to remote central Australia via the new AUSSAT domestic satellite. The bid was unsuccessful, with the licence instead going to Imparja Television, operated by the Central Australian Aboriginal Media Association (CAAMA).

NTD lodged an appeal against the decision but in the meantime the channel was bought out by Kerry Packer, who sought to negotiate operating the new channel as a joint venture with CAAMA but at the last minute his company withdrew the appeal and CAAMA proceeded to launch Imparja in January 1988. 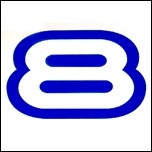 When Packer regained control of the Nine Network in 1990, NTD8 was brought into the network. Despite ownership by Nine, NTD8 as the sole commercial broadcaster in Darwin continued with the Channel 8 branding, providing a composite schedule of programming from all three commercial networks.

In 1994, Darwin became the last capital city in Australia to gain access to SBS – and it was 1998 before a second commercial channel, Seven Darwin, was launched in Darwin.

The launch of Seven Darwin (now Southern Cross Television) then saw NTD8’s schedule change to a mix of Nine and Ten network programs until New Year’s Day, 2003, when the channel was re-branded as Nine Darwin, even though it was still broadcasting on Channel 8. The change saw the loss of most Network Ten programming and local access to a full-scale Ten schedule was not to arrive until 2008 with the launch of Darwin Digital Television (DDT).

DDT launched as a digital-only channel operated jointly between Southern Cross and Nine and the new channel gave incentive for viewers to convert to digital television, leading to Darwin adopting digital television at a faster rate than most other markets. In the latest Digital Tracker survey, of the markets still in simulcast between analogue and digital, Darwin is leading the nation in digital conversion – with 89 per cent of households having converted their main television set, compared to the national average of 81 per cent. 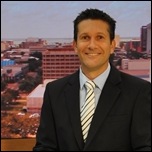 Despite the arrival of competition – and the subsequent suite of digital multi-channels – into what is Australia’s smallest capital city (population: 120,000) Nine Darwin continues to take pride as the market leader and maintains its local reputation with its flagship being the local Nine News bulletin, fronted by Jonathon Uptin (pictured). Production of the local newscast has recently been revamped to match the look and style of its Nine Network counterparts in the eastern states.

Nine Darwin also provides transmission of Nine’s digital channels GO! and GEM. Darwin is scheduled to switch to digital-only television transmission in the second half of 2013.

Permanent link to this article: https://televisionau.com/2011/11/nine-darwin-40-years-today.html