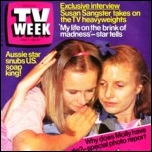 The Nine Network’s A Current Affair appears to have found a new goldmine for story ideas – revisiting some of Australia’s former TV favourites.  With last year’s lengthy interview with producer Reg Grundy and recent reunions and reminisces with the casts of Prisoner and Young Talent Time, the tabloid current affairs program last night (Monday) turned its attention to long-running soap A Country Practice which reaches the 30th anniversary of its debut later this year.

ACA reporter Brady Halls tracked down ACP creator and producer James Davern to get some of the inside gossip on the series that ran for thirteen years, clocking up over 1000 episodes across two networks.  Some of the show’s highlights are also remembered, such as the wedding of Simon Bowen (Grant Dodwell) and Vicki Dean (Penny Cook) in 1983, and the death of Molly Jones (Anne Tenney, pictured above right) that captivated the nation in 1985. 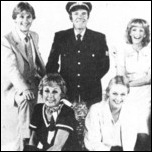 The segment also caught up with former cast member Wendy Strehlow (Sister Judy Loveday) and visited the town of Pitt Town which provided some of the exterior locations for the fictional Wandin Valley.

Among the many guest stars to visit the fictional town over its thirteen years, none of them were as famous as the then Prime Minister Mr Bob Hawke, appearing at an anti-nuclear rally staged at Wandin Valley – a storyline that saw the show awarded a Media Peace Award by the United Nations Association of Australia. 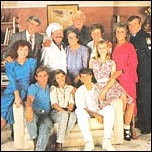 Davern recalls how he created the concept for A Country Practice for a scriptwriting competition being conducted by the Ten Network.  He came third in the competition but later pitched the idea to the Seven Network who took up the series during 1981.  The first episode went to air in November 1981 during the summer non-ratings period, and continued on Seven until November 1993 when, ironically, it found a new home at Ten.  But A Country Practice was not a huge success when Ten adapted the series, changing the series’ location and most of its cast, and it soon played out its few remaining episodes in a Saturday afternoon timeslot – a fairly inglorious end for a series that had achieved much success in Australia as well as being sold overseas.

The ACA story can be seen at their website.

Permanent link to this article: https://televisionau.com/2011/03/aca-remembers-acp.html